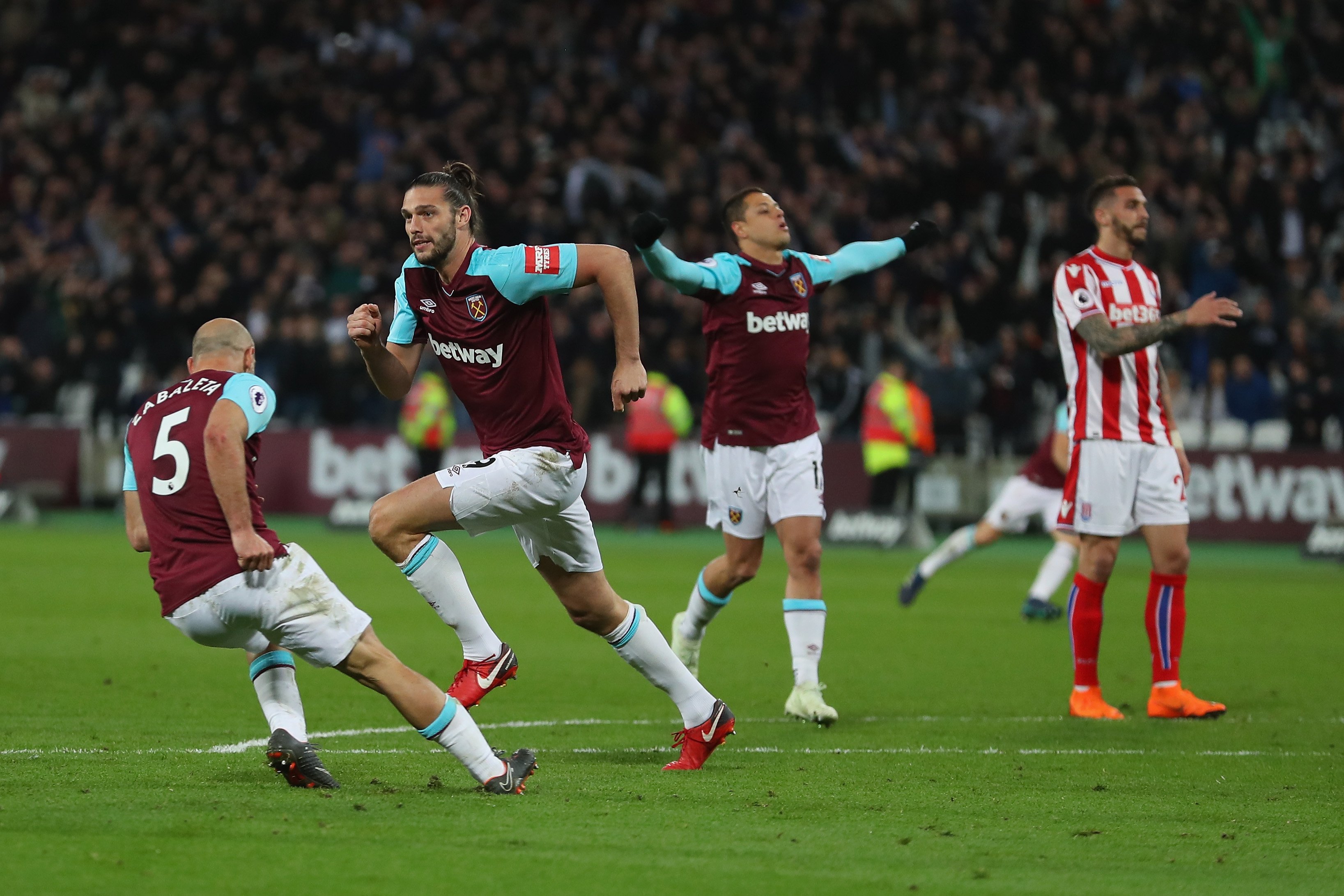 West Ham were denied a late winner after Hernadez fired in a shot which Butland failed to stop. But Carroll was adjudged to have handled the ball but the decision looked harsh.

Just moments before, Carroll – who had been on the field for just four minutes – earned West Ham a point after they were stirring defeat in the face.

It was an action packed final ten minutes in a game that was lacking quality.

West Ham looked as if they were going to be sucked back into the relegation zone just as they were heading to safety. But Andy Carroll had other ideas.

Stoke were desperate to hold onto their fortunate lead. They even had Peter Crouch  back defending in the left back decision. It was a Cresswell deep cross which Andy Carroll on the edge of the box, he leaped forward and volleyed left footed beyond Butland into the bottom left corner. The London Stadium, which had been eerily quiet all night, erupted.

But the late goal proved why Stoke are where they are. You could argue that they didn’t even deserve to be leading after they lost their influence on the wings as Sobhi and Bauer was taken off and Diouf was forced out wide. They looked as if they were falling away with their attacking threat reduced.

But just as the game appeared to be fading away, Joe Hart gave Stoke a huge gift. Shaqiri was stood on the edge of the box with a sea of claret and blue shirts in front of him. He shot low towards Joe Hart and it should have been comfortable for a man of his ability. But he flapped at it. His fumble allowed Peter Crouch to thunder in the shot to give Stoke City a lifeline but they could not hold on.

It was a fairly even game with both teams playing a similar style of football. West Ham and Stoke both used the wing backs with a three-man defence, but it was West Ham who fared better. The intention was to play the ball towards Arnautovic and it worked quite well. Noble produced some great long balls which found Arnautovic in space, but his shots were comfortably saved. He showed intelligence to make runs which stretched the Stoke defence, but his shots didn’t ask enough questions of the defence.

Arnautovic gave the Stoke defence problems to deal with and his strength proved hard to handle in complete contrast to Diouf at the other end who had a limited amount of service, and was far less commanding on the ball. A cross by Shaqiri found only the goalkeeper with Diouf in a good position in the area.

Stoke had a chance after Sobhi and Pieters interchanged on the left wing. Shaqiri dropped off in box, creating the space but as he attempted to get the ball under control, the West Ham defence pounced and cleared. And he was crowded out on a couple of occasions.

Shaqiri, despite assisting Stoke’s goal, was poor. He looked a yard off pace with heavy touches forcing him to concede possession. You would expect more from Shaqiri who is immensely gifted technically but you question whether he has the attitude that is required in a relegation scrap.

Diouf did have one good chance after Sobhi caught the ball on the end of his foot and directed it sweetly into Diouf’s path, he fired the shot down the middle, but it was straight at Joe Hart and all too easy. Diouf then had a golden opportunity. Bauer made a blistering run down the right wing, easing past Masuaku whose lazy run was unjustifiable. Bauer wanted it more, and he cut the cross back to Diouf who was free in the box, but with the goal gaping, he skewed the shot over the bar.

Diouf was non-existent, and with him as Stoke’s main outlet, it is no surprise that they are on the verge of relegation to the championship.

West Ham found space down their right wing with Pieters often out of position. Tactically, it was questionable by Stoke. They played wing backs, who looked to get forward but was there any need when they already had Sobhi and Shaqiri up front on either side of Diouf? It left big gaps on the sides of the Stoke defence as they struggled to get back in time. First it was Arnautovic who ran into the area, swivelling the ball past Shawcross but his shot was comfortably saved. Then Kouyate found space down the right, but his cross was cleared by Zouma. But West Ham didn’t capitalise on that advantage. They took lacked a quality in the final third.

Cresswell’s deliveries were accurate producing cross after cross and he nearly assisted Arnautovic for the goal but as the deep cross came towards him, he was a yard offside, and the goal he directed past Butland was ruled out. Stoke’s decision making was questionable after they gave West Ham a handful of free-kicks in dangerous positions. Cresswell forced to saves out of Butland but Stoke kept letting it happen.

Then West Ham had another goal ruled out, this time Arnautovic was adjudged to have unsighted Butland as Fernandes’ shot fell into the back of the net. Michael Oliver, who has received a lot of criticism (which hasn’t been justified) got the big decisions right.

But just as Stoke were about to be handed the win on a plate, they made a complete dog’s dinner of it and allowed West Ham to equalise.