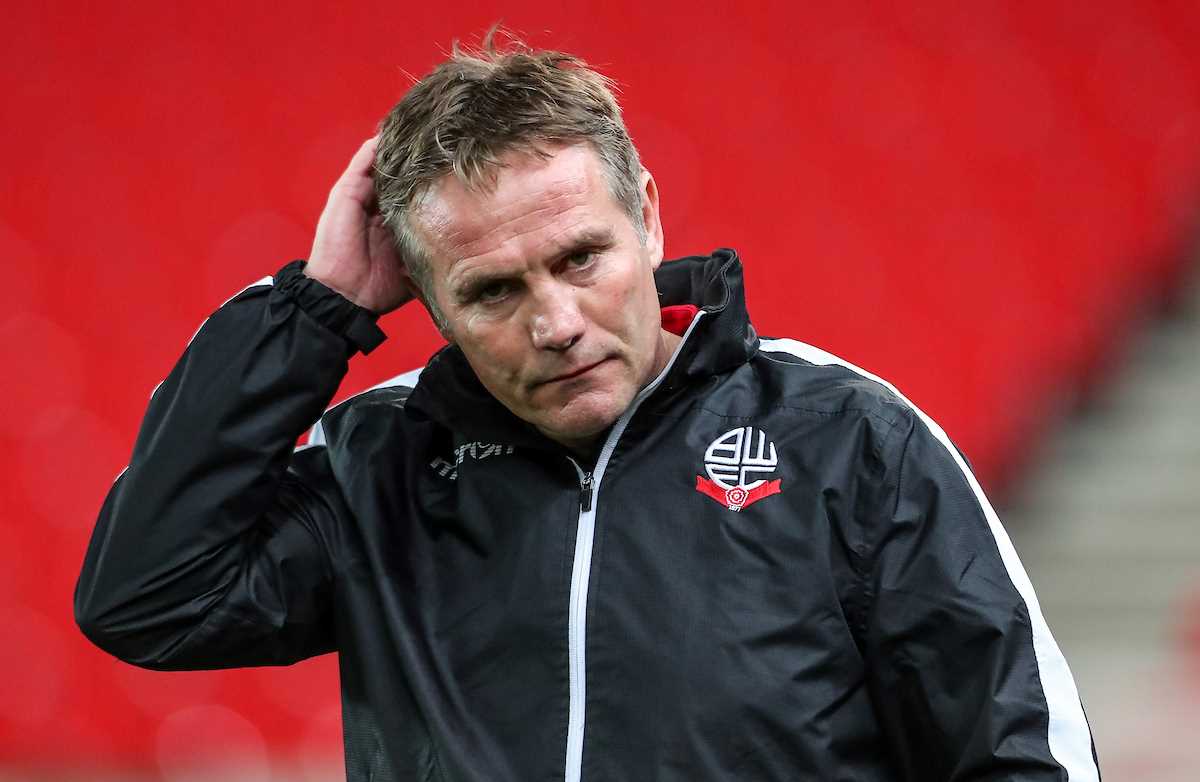 Image can be found at: https://www.bwfc.co.uk/news/2018/october/in-his-own-words-phil-parkinson-post-stoke-city/

After one of their best starts to a championship season in recent years, Bolton once again find themselves just above the drop zone. New signings and a win against promotion-favourites West Brom had fans optimistic about their team’s chances this year. As every fan knows, the Championship can throw up some unlikely results, but not for Bolton it seems.

After just one win in twelve, the blame is being pointed in every direction. “Tactically we have no idea.” “Where are the goals going to come from?” “Too many changes in the starting 11”. These were just some of the thoughts in the minds of the Bolton fans after their third straight defeat.

A growing number of fans now believe that it may be time to change the manager. Others are upset with Phil Parkinson’s tactics and constant tinkering with the starting line-up. But is this a fair assertion?

The manager’s track record speaks for itself, an automatic promotion in his first year under a transfer embargo was a huge feat. He somehow saved Bolton last year when everybody else deemed it impossible. It should also be noted that Bolton have more points at this stage of the season than they did last year, so in that sense they have improved.

It is fair to say that Parkinson likes to alter his team game after game. This is one of the reasons fans have for the poor run of form. So, has this had an impact on this year’s results?

As the graph shows, when Bolton have made 3 or less changes, they have averaged 1.25 points every game over a period of eight matches. However, when they have made four or more changes – which has happened seven times this season – they have averaged just half a point every game. Many believe that with confidence at a low, it may be wise to keep the bulk of the side unchanged and the data for this season appears to support that.

But last year, there was no clear difference in the points tally whether Parkinson made three or less, or four or more. So perhaps this issue is slightly overstated. But it cannot be denied that if changes are kept to a minimum for the majority, you are likely to get more points. Last year, Bolton’s biggest unbeaten run was seven games, and during that period only four changes were made to the line-up.

A lot of fans have criticised the manager because they believe that the style of football has been negative with less emphasis on attacking. Bolton this year have averaged just under ten shots every match, which is a fair amount of shots to have. Where the problem lies, however, is in the number shots on target. Bolton have averaged just less than three shots every game, which is nowhere near good enough. However, this highlights more a lack of creativity and confidence than it does about Bolton’s alleged lack of attacking style. In their last five games, Bolton have had 62 shots. That is an average of 12.5 – three more than their season’s average. But in those 62 shots, only one goal has been scored.

The lack of shots on target is perhaps no surprise when you look at Bolton’s squad. There is an absence of creative players. Ameobi has been injured for the bulk of the season and wingers Buckley and Noone are hardly renowned for their quick passing, darting runs and bullet crosses. Wildschut does have those qualities in his repertoire but has let the side down with some shocking performances. Oztumer has added some creativity to the team, but Bolton still look lacking in that department. The finger can be pointed at Parkinson for not having enough creativity within his ranks, but as everybody knows, good creative players cost money.

Quite a good number of Bolton’s shots in recent games have been goalscoring opportunities. Nearly half of all of Bolton’s shots have been inside the box. However, much of Bolton’s play has been predictable which further highlights the lack of creativity. But If Bolton continue to get opportunities, by the law of averages, one will go in sooner rather than later. It doesn’t help when confidence is so low which is what attacking players thrive on. That one goal may be the key to rejuvenating the side.

When Bolton went on their good run of form at the start of the campaign, much of their goals came from crosses and set pieces. Their opening three goals against West Brom and Bristol were all from crosses and corners.

The last time Bolton got a goal from a set piece or cross was against Birmingham in their 1-0 home win. A huge amount of their success when they won promotion from League One was the result of set pieces, which led to Filipe Morais being dubbed ‘The Postman’. However, since his departure he hasn’t been properly replaced. Bolton are a physical side and are strong in the heading department. If on-the-ball creativity is the issue, then perhaps more focus on set pieces would be beneficial.

If results don’t improve, then what?

The last few matches have been deemed must-wins, so the pressure is certainly on the manager to turn it around. The chairman Ken Anderson has, in the past, ranked up the heat himself, saying he would do whatever is necessary to turn the bad form around.

Going public was perhaps the wrong-approach. With reports of pay issues leading up to the match against Aston Villa, and nearly falling into administration earlier this year, perhaps Mr. Anderson should look at himself before he passes judgement on anybody else.

The manager’s track record shows that he has turned around Bolton’s fortunes in much worse circumstances, and for that he deserves more time. This is not the mention the fact that probably nobody else could do a significantly better job at this current time, who would also not cost money.

For example, Mick McCarthy who last year left Ipswich is perhaps the most experienced candidate of those who are available at the moment. But Bolton fans are unlikely to see anything different as much of the criticism laid at Mick McCarthy is the same towards Phil Parkinson.

Thereare other options such as Ian Holloway, Jimmy Floyd-Hasselbaink and Simon Grayson. But you could hardly make the case for them doing a better job than the current manager.

If the board were to choose a big name or somebody already in a job, that would come at a price. Phil Parkinson is already one of the lower paid managers in the league, and it would be spending money that Bolton simply do not have.

Another option would be to choose a former player such as Kevin Nolan, or David Lee/Jimmy Phillips who manage the youth teams. This would be an almighty gamble and one Bolton could ill-afford to do.

Bolton, it appears, would only come out worse after a managerial change at this stage.

This current bad run of form is by no means impossible to overturn. Bolton need to go back to the things that they are good at such as set pieces.

A more settled side would go a long way to boost the player’s confidence going into games. This will also minimise the amount of goals Bolton conceded due to giving the ball away, which has been a huge issue this season.

At the moment, Bolton are underperforming. Olkowski, Wilson and Magennis are all international footballers and the whole team has a wealth of Championship experience.

Bolton have the strength in their squad and in their manager to turn their bad run of form around.