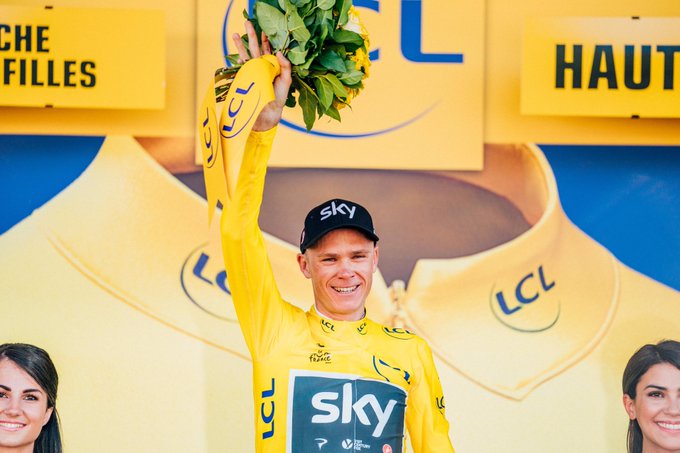 As the riders take a break from the arduous Tour, after one mountain stage; three hilly stages; four flat stages and one time trial, we take a look back at the events taken place over the last nine days. The riders have been through Germany, Belgium and Luxembourg, with 1595.5km under their belts. It has been an action packed nine days, here are five things you may have missed:

Incredible drama at the #tourdefrance2017 Best of wishes to @richie_porte That was a very bad crash! pic.twitter.com/GrrrBz9kmd

The Mont du Chat claimed 11 victims on stage 9 as they were forced off their bikes on the descent. Geraint Thomas, who was second in the overall standings and held the yellow jersey for four stages, left the tour with a broken collarbone.

The most shocking incident came when Richie Porte, Chris Froome’s main rival, missed the road on a winding bend and toppled over on his bike which sent him crashing into the rock wall. He was riding at 75km/h and Great British rider Dan Martin was caught up in the incident but came out unscathed. The Tasmanian, Porte, suffered a fractured shoulder and Pelvis and will not return to the race.

Marcel Kittel took his third stage win on stage 7, but it was close-run. Boassan Hagen and Kittel had been going hell for leather in a Grand National-like finish and even the photo finish could not separate the riders, but Kittel was awarded the stage by a hare’s breath.

This is the image that will break French hearts! #itvtour pic.twitter.com/9eIHVlpmNH

Rigoberto Uran snatched stage 9 from Barguill’s grasp after Barguill thought he had won it as he punched the air. Barguill had led the race for a long period but the peleton eventually caught him, but remarkably Barguill fought back to almost claim the stage, but the photo finish showed it was Uran’s win.

The green jersey dominator was disqualified after another dramatic finish on stage 4. Seconds from the finish, as Mark Cavendish was sprinting from the outside, forcing his way past rival riders, he clashed with Peter Sagan who stuck out an elbow which sent him crashing into the hoardings. The replays showed that it may not have been deliberate, however the Tour organisers found it against the rules after he ran an “irregular sprint” and was sent home.

Geraint Thomas took the yellow jersey on stage 1 at the 14km time trial and held it until stage 5 where Froome took over and at stage 9, he extended his lead. Team Sky are once again dominating the Tour with a seven minute lead over Ag2R La Modialle, the team in second place and Astana 26 minutes behind in third. The aim is to keep the yellow jersey until the final stage, something which hasn’t been done since the 1970s. Advantage Team Sky.

With Sagan out of the race, the man who has held the jersey since 2012, the race for the maillot vert is anybody’s game. But it is currently Marcel Kittel’s to lose who already has three stage wins under his belt and a 52 point lead over the rider in second place. But with many more points on offer, the race is far from over.

It is certainly Chris Froome’s title to lose after he extended his lead and the main rival Porte left the race due to a horror crash, can Team Sky achieve their goal and keep the maillot jaune until the final day?

Marcel Kittel will be devastated if he does not win the green jersey this time around after coming second last time, can he finally break the mould and take the green jersey off Peter Sagan albeit in somewhat easier circumstances after Sagan was disqualified?

Will Romain Bardet be the one to topple Froome? He attacked on the descent on stage 9 gaining a thirty-second lead, but was eventually caught by Froome and at the end, finished half a bike behind. He finished second overall last year – can he go one better?

‘Uber for Bikes’ has arrived in Manchester!
Chris Froome positions himself amongst the greats after fourth Tour win